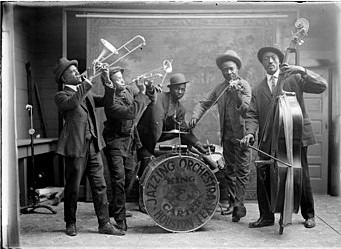 The 1920s decade is often known as the Roaring Twenties and is usually remembered for the many eccentricities and trends that Americans followed at that time. The pop culture of this decade was exuberant, defiant, and boisterous. This was at least partly because of the upward turn in the American economy after the end of World War I. While Prohibition was still in effect then, many people openly defied it and indulged in new ways of dressing, dancing, and entertaining themselves as well.

This decade is also known for the rejection of conventional moral standards and many other societal changes. The book ‘The Great Gatsby’ by F. Scott Fitzgerald is held up as an encompassing symbol of this decade, with the author also defining this time as ‘The Jazz Age’. Art deco was the favored kind of architectural style in the Roaring Twenties, and represented this decade quite accurately. This style is somewhat glamorous, exuding optimism and luxury. Some fine examples of this style can be found in the Empire State Building and the Chrysler building. The effect of Art Deco is modern but also timeless, since it retained the stately look of traditional styles. One of the most iconic images representing the Roaring Twenties is that of the flapper. These were women with short, bobbed hair, loose drop-waisted dresses, a somewhat thin figure, and flashy jewelry. Their dresses would usually have shorter hemlines than was traditionally acceptable before that time, while their makeup included pluming up their lips and drawing pencil-thin eyebrow lines.

Clara Bow is one good example of a flapper-style starlet. It wasn’t just about the physical appearance of the flappers either, but the way they defied norms for females by smoking, dancing, and drinking in public. They also represented a more liberal mindset when it came to sexual relations. Overall, such women presented a scandalous rebuff to polite society as well as the elder generations. Music is an undeniable part of pop culture in any decade; people still remember the music trends of the 80s and try to copy them. In the 1920s and 30s within the United States, jazz music was rapidly becoming more and more popular. The ratio of radio ownership was rising all over the country, which meant that the younger generation was listening to the New Orleans beats very easily.

In the 20s, jazz represented a new hybrid style of music that combined Creole, ragtime, and blues music. This mixture meant a way to go against the traditional forms of music, which was the main trend of this era. This is partly why the 20s are so aptly described as the Jazz Age. Now, jazz is regarded as the classical musical style of America. The art aspect of pop culture in the Roaring Twenties was mainly represented y Precisionism, which used geometric shapes and the smooth application of paint. Artists during this era were mostly inspired by the unique landscape of America, with the names of Charles Demuth and Charles Sheeler rising to the top. these artists showed machinery, infrastructure, and new buildings in their works. These structures eventually came to define the country.

At the same time, artists like Georgia O’Keefe used nature, natural landscapes, and similar ideas for their inspiration. They used a simple yet elegant form that is still quite enchanting today. In fact, the Precisionism movement was the first artistic movement to emerge from America. It was also the base for future movements, such as the modernist trend. While women were breaking out and rebelling in terms of their dress and their actions, the Roaring Twenties was also the first one where American women could finally vote. The Nineteenth Amendment was passed in 1920 and set the stage for several years of social change.

From there on, the suffrage movement also included struggling for more rights for women. These included reproductive rights, Their fight wasn’t over yet, as suffragists like Alice Paul knew all too well. There was still discrimination against women in the workplace, with unequal pay still being one of the most hotly contested topics. Several million African Americans migrated within the United States in the 1920s. They moved from the southern states to northern America, mainly in search of better economic opportunities. As a result, new communities came to life, with the Harlem Resistance being an all-encompassing factor.

The Harlem Resistance was known as a social, artistic, intellectual, and political movement all rolled into one. It produced some of the most well-known works of music, literature, and art in that decade. The movement was named after the neighborhood of Harlem in New York City, which is where many African Americans came to settle. The creativity from this area would soon spread throughout the whole country. Iconic artists in this cultural aspect include Augusta Savage, James Van Der Zee, and Langston Hughes. Their work was a creative expression celebrating their identities and is still an inspiration for artists almost a century later.

As mentioned above, the 1920s was still in the time of Prohibition. this meant that the constitution banned any production, transportation, sale, and even importation of any alcoholic beverages in the country. This did cause drinking rates to forcibly go down, but also meant a rise in the black market for such commodities. Speakeasies and bootlegging were a part of life for many people in the 1920s, all as part of the rebellion felt against the Eighteenth Amendment. “The Great Train Robbery” was the first-ever movie with a story sequence to achieve the big screen. This was screened in movie theaters called ‘nickelodeons’, since the admission was just five cents. With this start, the 1920s became the decade when the American movie industry started growing very rapidly.

In Southern California, Hollywood rose as the movie capital of the whole world, mainly due to its long daylight hours. While the earliest films didn’t have any censorship code, the public outrage soon led to the screen magnates establishing one in 1927. Color films also began coming out in this era, making the popularity of movies grow even further.

The pop culture trends above were what made the 1920s into the Roaring Twenties. People were optimistic, rebellious, and keen to try out new things. However, there were some lows in that decade as well, which culminated in the huge stock market crash in 1929. The problems of the 20s are not to be ignored, though the culture from that time is colorful and fascinating. By look at both the highs and the lows, we may learn a lot from the trends of this decade. It’s also worth looking at the pop culture trends of the 50s and seeing how they present a stark contrast to the Roaring Twenties culture.