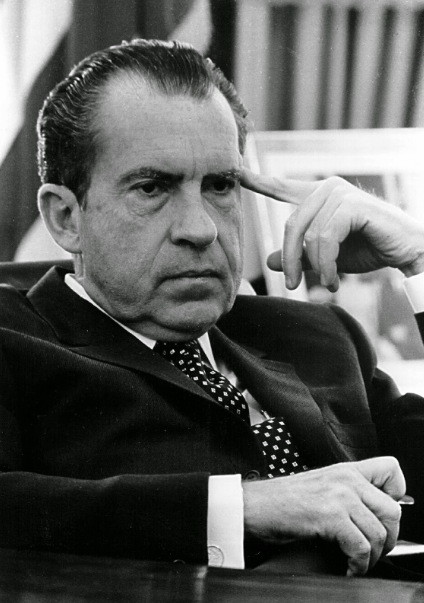 Richard Nixon was described to have stood at five feet and eleven inches. He had brown hair and eyes; also, he had thick eyebrows and his protruding nose. He was observant yet, practical. He was also described as reticent but determined and as having a reasonable attitude on life. He planned his actions meticulously and hoped to execute them with deliberate precision.

In this article, find out the key traits and characteristics of Richard Nixon.

He enjoys meticulously planning things ahead of time. He has a well-ordered routine. He also wants items that are well-organized and pay close attention to minor details. When things are out of order, he cannot rest until everything is in order and the work has been accomplished.

Richard Nixon would instead work himself to death with extra days and sleepless nights than fail to meet his deadlines. For him, loyalty is a powerful emotion, and he is dedicated to the people and organizations to which he has pledged his support.

If he lost his composure and broke down at any sign of difficulty, none of his promises would mean much – he kept his feet on the ground and made straightforward, logical decisions. People’s tastes are considered in this process, as is his work to make the best use of human characteristics, but these choices are taken with efficiency rather than empathy in mind. The same is true of criticism directed at others and himself.

Richard Nixon has a systematic approach to achieving objectives and finishing assignments, and he can work at a steady pace to complete these tasks. He could tune out distractions to concentrate on the task at hand, and he was often characterized as dependable and trustworthy.

His main concern is for them to be successful with what they’ve decided to do, and he believes that this is best done when everyone involved is aware of what’s going on and why. Uncertain instructions and people who violate existing rules jeopardize this endeavor, and Richard Nixon rarely tolerates them. The chaos caused unpredictable delays and missed deadlines; structure and regulations encourage dependability.

Paranoid and Distrusts the Media

Nixon was a highly insecure man with a victim mentality, and his relationships with political rivals and the press reflected this. He was a ferocious political warrior who believed that each of his political battles was the most important. Nixon campaigned on a platform of squashing the counter-cultural elements of the 1960s and speaking up for an under-represented silent majority’ after branding himself as an anti-communist crusader in the 1940s and 1950s. This was a successful political tactic because it gave the impression that he and his followers were both victims of persecution.

Always by the book

Richard Nixon was a firm believer in following well-defined laws, which made him unable to deviate from them or do new stuff, even though the risk was negligible. He is almost paralyzed in truly unstructured situations.

He was opposed to reform and creativity because of his need to preserve tradition and follow the rules. Suspicious of technological advances and methods of doing things, they not only struggle to accept progress when forced to, but they also stifle ingenuity or refuse to see the value of solving old challenges in new ways. That is why he was worried about the opposition party’s chances of winning and making them appear particularly difficult and stodgy to his colleagues and subordinates.

The existence of the Watergate scandal, a critical event in Richard Nixon’s downfall as president, can be traced to his paranoia and justified suspicion that some of his political foes were evildoers. To defeat these foes, he believed he needed to use any political weapons at his disposal to protect his position as president, regardless of their legality. Nixon also felt that as President of the United States, he was immune from prosecution and violated those rules. Each of these characteristics is not rare in other politicians and world leaders; however, it was the combination of these factors that caused Nixon to resign.

The facts are the facts, and Richard Nixon has a hard time accepting any new theory based on them. This fact-based decision-making method makes it difficult for him to believe that they were mistaken about anything – but everyone, including them, may overlook a detail.

Richard Nixon can take emotions into account, but only to the extent that it helps him decide the most effective way to express what needs to be said.

Richard Nixon exuded a stern, conservative demeanor. He needed to know and obey the game rules, and he prefers to be in predictable situations where he knows what his job is. Richard was a hard worker and would not give up before a job was completed. He was methodical and rational, and he enjoyed tasks that required him to solve problems using step-by-step reasoning. Richard Nixon was a stickler about details and double-checked everything to make sure everything was right. He systematically restored order to their little areas of the universe, using his clear reasoning and attention to detail.