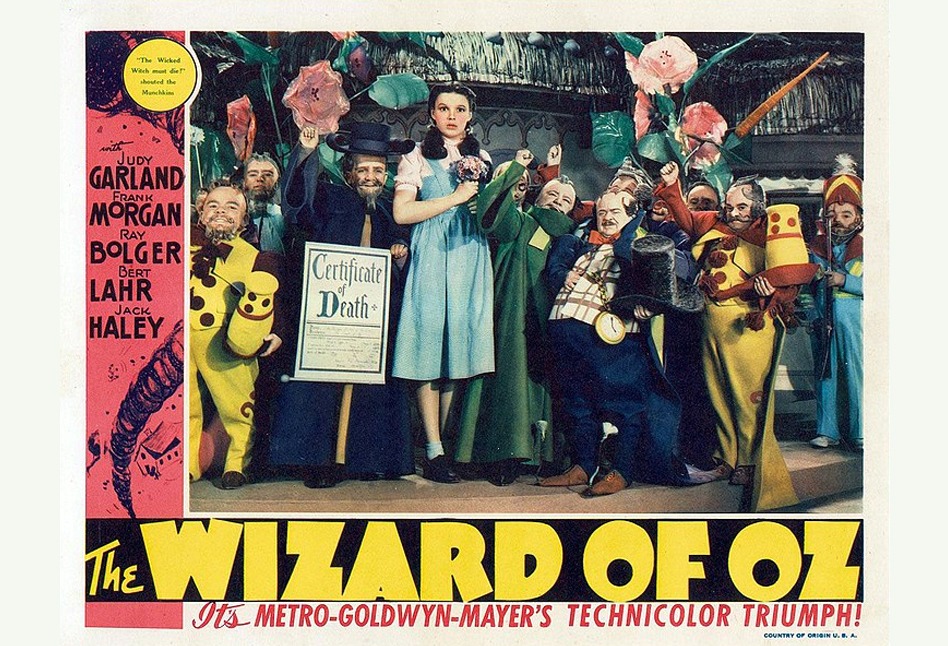 Months before The Wizard of Oz was to be released in Los Angeles, MGM began a massive promotional campaign. Having spent over $3 million creating the film, MGM instituted a well-timed, comprehensive publicity plan to assure its success.

In a pre-television era, where newspapers and magazines were the major advertising and promotional tools, MGM carried out a massive paper campaign, distributing magazine articles and cover art in full color and buying ad space in all the major publications of the time. For theater owners, a variety of popular press book materials were distributed, including lobby cards, posters, banners, buttons, and even suggestions for promotional contests and events to build hype.

MGM had plenty to brag about with The Wizard of Oz, including state-of-the-art special effects, technical wizardry and breathtaking sets, fantastic costumes and makeup, the singing Munchkins, and, of course, the music.

Not only did the studio tout the film’s considerable budget, but also the fact that The Wizard of Oz was filmed using a three-strip Technicolor process that had been employed by less than a dozen feature films at that time. MGM distributed lush, Kodachrome color posters to individual newspapers and magazines, giving fans a tantalizing sneak peek of the film’s beauty and technical achievement.

In anticipation of the movie’s popularity and marketability, Loew’s even established their very first merchandising department. Although their products were met with limited success, dozens of other companies soon followed suit, developing The Wizard of Oz products that only added to the overall visibility leading up to the film’s premiere.

MGM was smart with its publicity machine, however, holding off for the perfect moment and releasing nothing until mid-summer 1939, just months before the film’s release. Because of this careful control, nothing released by the promoters was put to waste, and every cent spent on the campaign was apparent with visibility that quickly saturated the media market. This careful control was applied to the release of The Wizard of Oz music as well. Songs from the film remained unavailable for radio play or recording until the picture was released. MGM did, however, preview much of the score on its own network program “Good News of 1939” that June, with many of the film’s cast participating.

With all the media hype, merchandising, and previewing of songs, for many the most memorable moment in The Wizard of Oz promotion was the opening of the film itself in New York City. MGM teamed up with Loew’s to create an unprecedented premier experience on Broadway, with patrons treated to nothing short of a The Wizard of Oz variety show.

First, the film itself was screened, followed by short subjects and trailers. Then, as John Fricke and Jonathan Shirshekan write in their book, The Wizard of Oz: an Illustrated Companion to the Timeless Movie Classic, “the curtains parted again to reveal the 21 piece Georgie Stoll Orchestra and The Martins vocal group; their imaginative rendition of We’re off to see the Wizard opened the show. But the theater shook…when [Judy] Garland and Mickey Rooney… took the stage,” entertaining the theatre with a song and dance act that lasted 25 minutes. This superstar Duo (Rooney was the Box Office star of the nation at the time) did this five times a day — seven times on weekends — giving The Wizard of Oz the tremendous boost in popularity that MGM had envisioned and helping to secure its place in history as a timeless classic.