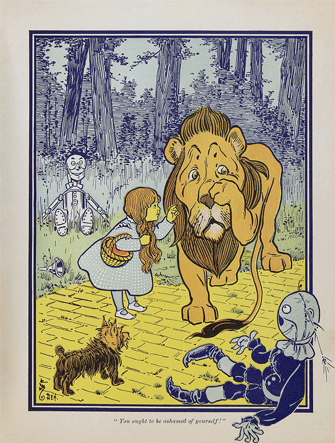 From the Golden Arches to the Yellow Brick Road…

BURBANK, Calif. August 27, 2013 – Marking the 75th anniversary of one of its crown jewels, The Wizard of Oz, Warner Bros. has launched a comprehensive, cross-divisional campaign encompassing theatrical, home entertainment and consumer products.

The studio estimates that some $25 million will be spent on their marketing, advertising, and promotional efforts.

McDonald’s will feature limited edition The Wizard of Oz toys in Happy Meals in over 14,000 locations throughout the U.S. and Canada from Sept. 20 through Oct. 10 at participating restaurants while supplies last.

The Wizard of Oz Happy Meal® program features one of six adorable stylized figures, including the most popular and beloved characters of the film. As part of their Happy Meal purchase, kids can receive Dorothy, Scarecrow, Wicked Witch of the West, Tin Man, Glinda the Good Witch, or Cowardly Lion. Each figure comes with a Yellow Brick Road™ base to stand on. All of the bases in the line-up can connect together, allowing kids to recreate their own version of The Wizard of Oz friends walking down the Yellow Brick Road. For added fun, kids can fill in the blanks to their favorite TheWizard of Oz movie quotes right on the Happy Meal box.

The three Warner Bros. divisions, IMAX® Corporation and the TCL Chinese Theatre IMAX will host the September 15th world premiere of the film’s first-ever IMAX® 3D release at the grand opening of the new TCL Chinese Theatre IMAX, the largest IMAX auditorium in the world and the first IMAX theatre in Hollywood. When it was known as Grauman’s Chinese Theatre, the facility was the site of film’s original Hollywood premiere in 1939. An exclusive one-week IMAX® engagement at the new theatre and in more than 300 IMAX theatres across North America follows, beginning Sept. 20. Finally, the Toronto International Film Festival will show The Wizard of Oz in IMAX® 3D on September 15 (the closing day of the festival), at the Scotiabank IMAX Theatre in Toronto.

Said Jeff Baker, WBHE’s Executive Vice President and General Manager, Theatrical Catalog, “We are delighted that so many partners have joined us for this unprecedented event. Like us, they recognize that The Wizard of Oz is such a timeless brand, one for all ages and all generations. Its magic has helped it to grow, year after year, from a classic to a treasured icon.”

Below details the programs of some of the other national corporate marketing partners: