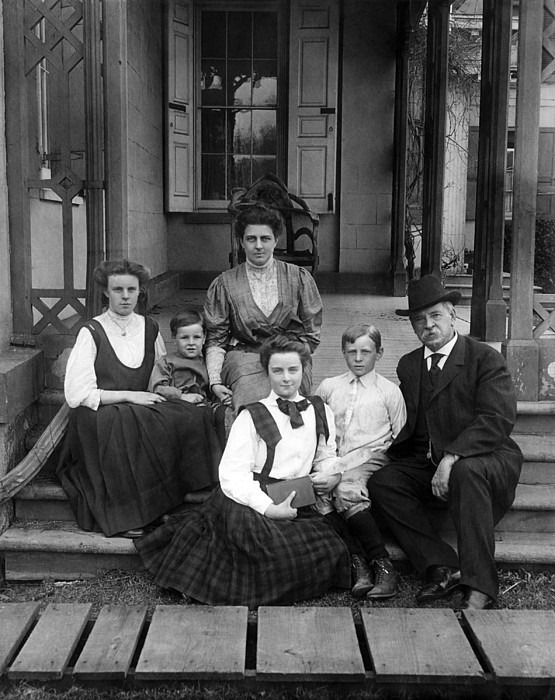 Grover Cleveland is considered as one of the hard working presidents of the United States of America. He kept himself occupied by doing his own paperwork and finish late at night. He was a bachelor when he served for his first term in the White House and married Frances Folsom in his second year in the office making him the first bachelor president to be married in the White House. The couple are happy with their marriage despite their age gap and had five children.

In this article, let us take a different approach towards the Cleveland family and discover who the children of Grover Cleveland are. The only daughter of Emma Harmon Folsom and Oscar Folsom, a lawyer, was Frances Folsom. She was born on July 21, 1864 in Buffalo, New York. She lived comfortably and studied in private schools, but after her father died in a carriage accident in 1874, her life changed drastically. Despite receiving inheritance from his late father, she moved and lived with different relatives in Minnesota and Michigan. Eventually she moved back to Buffalo, New York.

Frances and her mother visited Europe for a year after her graduation from Wells College in Aurora, New York, in 1885. From there, Frances began entertaining Grover Cleveland, the newly inaugurated president, who had been the law partner and executor of Oscar Folsom and a close friend of the family prior to the birth of Frances. There are some historical accounts that Grover Cleveland bought Frances’ baby carriage.

There are rumors that the president was pursuing her mother as they constantly visit the White House in the spring of 1885; however, Grover Cleveland proposed to her through a letter just in time before her trip back to Europe. It did not stop here from her travel plans. As soon as she returned, the couple were married on June 2, 1886 in the Blue Room of the White House. It was the first time an incumbent president was married in the White House.

At only twenty-one years old, she became the youngest first lady in American history. She became popular because of it that is why she was a sought after endorser for various family products. Many parents even named their children after her. Another rumor spread that she was physically abused by her husband, it explained how it affected the unsuccessful attempt of Grover Cleveland for second term. Because of it, she released a letter addressed to all the women in the U.S. telling how lucky she is to marry a man who is kind, affectionate, attentive, and considerate.

Another first for the Cleveland family was they rented a house outside Washington D.C. for them to enjoy a little more space and privacy. They only return to the mansion if there are official occasion and events.

They had a young daughter by the time Grover won a second term in 1892, and Frances was pregnant with Esther. They lived in another rented house in Georgetown during his second term, when the family needed even more space.

After leaving the White House in 1897, she had another daughter 1895 and two sons. In 1908, Frances and Grover retired to Princeton, New Jersey, where Grover died. In 1913, Frances married Thomas Jex Preston, an archaeologist from Princeton, making her the first presidential widow to remarry. She died in 1947 and was buried in Princeton alongside Grover Cleveland. Ruth Cleveland was born on October 3, 1891 in Princeton, New Jersey. She was the eldest daughter of Grover Cleveland and Frances Cleveland. Her birth became sensational because it was between her father’s two terms as the president.

She was sickly and contracted diphtheria. Doctors thought she will survive the disease but she died on January 7, 1904, a few days after she was diagnosed.

The candy bar “Baby Ruth” of the Curtiss Candy Company claimed to name their product after her, seventeen years after her death; however, it was debunked by snopes.com. The candy bar was renamed in 1921 from its previous name “Kandy Kake”. Esther was born on September 9, 1893 in Washington D.C. Since it was the second term of her father to serve as the president, she was their only child to be born in the White House.

At the age of three, she contracted measles. Since it is contagious, it easily spread to other members of the household which led to quarantine. After five years, she contracted diphtheria.

She married William Sidney Bence Bosanquet on March 14, 1918. Her husband was a captain of the Coldstream Guards of the British Army. Her children are Frederick Albert Bosanquet and Philippa Foot.

Fun Fact: Esther’s daughter, Philippa Judith Bosanquet Foot was a prominent British philosopher and one of the founders of virtue ethics. On July 7, 1895, Marion Cleveland was born in Buzzards Bay, Massachusetts.

She worked for the Girl Scouts of America from 1943 to 1960 as a community relations advisor. She was also involved in the Women’s City Club’s activities. She graduated in 1914 from Westover School and for two years attended Columbia University Teachers College. Marion died on June 18, 1977 at the age of 81. Richard Cleveland was born on October 28, 1897 in Princeton, New Jersey. He was named after his paternal grandfather and was the eldest son of Grover and Frances Cleveland.

He enrolled in Phillips Exeter Academy. During World War I, Richard would serve as an officer in the Marines. He went to Princeton University and graduated from there in 1919 after his service was over. He then went on to study law at Harvard Law School after graduation, where he graduated in 1924. In Baltimore, he became a prosperous lawyer and remained in the city his whole life.

He became a delegate to the constitutional convention of the state of Maryland in 1967. Richard Cleveland passed away in Baltimore and was buried in Carroll County, New Hampshire. When she died six years later, his sister Esther was buried near him. Francis was the youngest son of Grover and Frances Cleveland. He was born on July 18, 1903 in Massachusetts. He attended Phillips Exeter Academy and Harvard College and eventually worked as a stage actor in New York City and played numerous roles in different plays on Broadway like Dead End by Sidney Kingsley, Our Town by Thornton Wilder.

Francis co-founded the Barnstormers Theater with his wife Alice Erdman and a producer in New Hampshire in 1931. He died at the age of 92 on November 8, 1995 in New Hampshire.