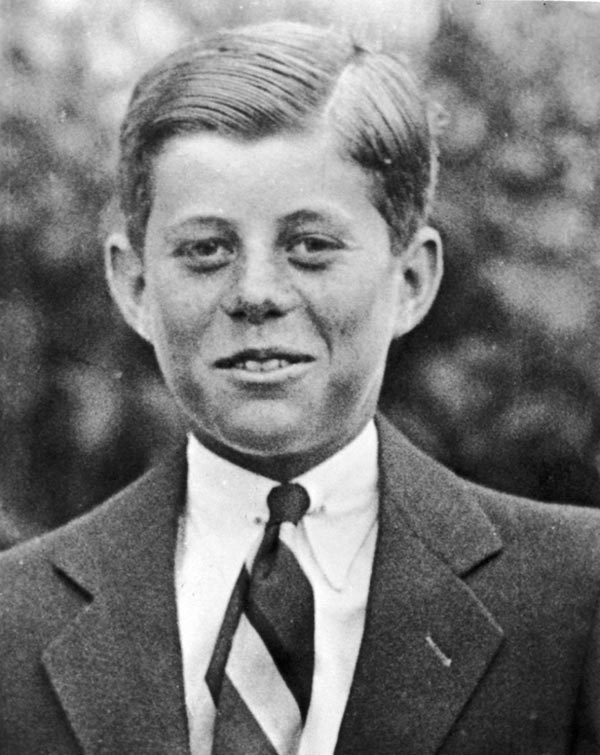 John Fitzgerald Kennedy was named after his maternal grandfather, Boston mayor John Francis Fitzgerald, also known as Honey Fitz. This young blue-eyed infant was quickly given Jack’s name by family and friends and popularly known as JFK. Jack was a sickly infant, and Rose noted her notecard the illnesses he had as a boy.

On May 29, 1917, Jack was born in Brookline, Massachusetts, to Joseph P. Kennedy, a multimillionaire businessman, financier, and wife, Rose Fitzgerald Kennedy. He was the second of nine children. There were seven children in all by the time Jack was eight years old. Joe was Jack’s older brother; Rosemary, Kathleen, Eunice, and Patricia were his four sisters; and Robert was Jack’s youngest brother. Teddy and Jean had not yet been born. Rose relied on nannies and housekeepers to help her manage the home.

Scarlet fever, an extremely infectious and possibly life-threatening illness, struck Jack on February 20, 1920, when he was just three years old. Joseph Patrick Kennedy, his father, was terrified that little Jack would die. Jack was never very well, and his family suffered as a result of his persistent illness.

The Kennedys moved to a new home in Brookline, a suburb just south of Boston, when Jack was three years old, just a few blocks away from their old house. With twelve rooms, turreted windows, and an expansive balcony, it was a beautiful home. Jack’s dad, who was full of energy and determination, toiled away at becoming a wealthy businessman.

Jack and his brother Joe Jr. attended the renowned Noble and Greenough Lower School, populated by white, Protestant families who had locked the Kennedys and Fitzgeralds out of Boston’s country clubs for years. Joe Srcompany .’s took him away from home for long periods, but he remained an influential figure in his children’s lives. Jack pushed them to be optimistic, stressing political debates at the dinner table and ensuring that business issues be avoided at all costs. He also expected high academic achievement from each of them, especially his sons.

Eventually, the Kennedy family moved to a rented mansion in Riverdale, a leafy suburb of New York City, in September 1927. They relocated to a house in nearby Bronxville not long after. For three years, JFK attended the Riverdale School before attending the Catholic Canterbury School in New Milford, Connecticut, for a year. He attended Choate, a Connecticut boarding school dominated by the old Yankee aristocracy, in 1931. Choate was an ultra-conservative school that barred Jews and only accepted Roman Catholics.

He and his peers were constantly in trouble with the school administrators because they were rowdy and disobedient. His leading talent was for finding new friends. JFK graduated from Choate in 1935, graduating 64th out of 112 students. He was a frail-looking young man with a thin face and a sickly frame, that is why he was often sick most of the time at Choate, and when he decided to go to Princeton instead of Harvard like his father and older brother, his freshman year was cut short. He was away from school in the spring of 1936. He changed his mind and enrolled at Harvard in 1936. JFK returned to Harvard University after his recovery and majored in government and foreign affairs. When JFK was in his junior year at Harvard, he traveled around Europe, observing the events leading up to World War II. These were included in his senior thesis, which became the best-selling book Why England Slept in 1940.

JFK attended Stanford University for graduate studies after graduating with honors from Harvard in 1940. Jack attempted to enlist in the U.S. Army in April 1941 but was turned down due to physical limitations. He was injured in the back while playing football. Months later, after a regimen of workouts had healed his back, he was admitted into the U.S. Navy. In Washington, D.C., he went on to work as an intelligence officer. The United States invaded World War II on December 7, 1941, after the Japanese attacked Pearl Harbor, a U.S. Navy base in Hawaii. Kennedy asked for active service at sea and was assigned to it in late 1942.

The goal of Lt. Jack Kennedy and his twelve-man crew was to prevent Japanese ships from supplying supplies to their troops. Lt. Kennedy’s crew patrolled the sea on the night of August 2, 1943, searching for enemy ships to destroy. A Japanese destroyer appeared out of nowhere. However, it was speeding up and heading right towards them. Lt. Kennedy, who was behind the wheel, attempted but failed to swerve out of the way. The PT-109 was smashed in half by the much bigger Japanese warship, killing two of Lt. Kennedy’s crew. The PT-109 staff was evacuated the next day. Joe, Jack’s brother, was not so fortunate. A year later, his plane blew up during a risky mission in Europe, killing him.

JFK was the Navy and Marine Corps Medal recipient for his leadership and bravery as he returned home. With the war officially over, it was time for him to decide what sort of job he wanted to do. Jack had imagined becoming a teacher or a journalist, but that changed when Joe died tragically.

When JFK, now the eldest Kennedy sibling, was working on a remembrance book for Joe Jr., Joe Sr. was overwhelmed with resentment. Joe Sr. threatened to take his grievances out on Franklin Delano Roosevelt and the Democratic Party when World War II, which he had fought, wound to a triumphant end. He quickly became the target of his father’s derailed aspirations. Joseph Kennedy, Sr. had lost his eldest son in a war that he had opposed, and he now focused all of his efforts and hopes on his second-born son’s political future. JFK later characterized it as “like being drafted.” “My father wished for his oldest son to pursue a career in politics. The term ‘wanted’ isn’t quite accurate. He insisted on it.” Joe Sr. found a willing vehicle for his ambition in JFK. He assumed responsibility for his family’s wishes and dreams for his older sibling.

Following his discharge from the Navy, Kennedy briefly worked for Hearst Newspapers as a reporter. Then, at the age of 29, he opted to run for the United States House of Representatives, a seat vacated by Democrat James Michael Curly, from a working-class district in Boston. Despite completing three terms in the Senate, from 1946 to 1952, Kennedy was dissatisfied with what he saw as stifling rules and processes that hindered a young, novice lawmaker from making an impact.

In April 1952, Kennedy stood for a seat in the United States Senate against Republican, independent Henry Cabot Lodge, Jr. He hadn’t just faced a kid, but an entire family. At least seventy thousand Massachusetts housewives had been hosted by the Kennedy women alone. Kennedy was re-elected to the Senate in 1958.

Kennedy’s record as an elected official and his books and essays drew widespread interest. He agreed to run for president after losing the vice-presidential nomination at the Democratic National Convention in Chicago in 1956. Kennedy was nominated for president on July 13, 1960, with Lyndon B. Johnson as his running mate.