Academy Award and Honorary Oscar winner in 1955, Greta Garbo, was born in Stockholm in 1905. She went by the name Great Garbo while her original name was Great Lovisa Gustafsson. She died in 1990 in New York City after earning herself the title of the most glamorous star with unmatched talent and beauty. She mostly played mystic and enigmatic characters that matched her personality to a great extent.

Garbo was raised by a struggling father who died of Spanish flu when she was only 14 years old. Forced to support and feed her family, Garbo started working at a department store where she modeled for products. She was noticed by a comedy director, Erik Arthur Petschler after she appeared in a short advertising film for the same store she used to work for. Petschler offered her a very minimal role in Luffar-Petter (1922: Peter the Tramp). Motivated by her performance and utterly ambitious to do something for herself, Greta enrolled herself at the Royal Dramatic Theatre in Stockholm and passed out in 1924. Soon after, she was cast for a notable role in Berling’s Saga, also known as The Saga of Gösta Berling. Mauritz Stiller, the Finnish director of the movie, had massive confidence in Greta and he was the one who gave her the name Garbo.

Her first-ever movie, The Saga of Gösta Berling was a cinema adaptation of a famous novel by Selma Lagerlof, who was also a Nobel Prize winner. Since then, Stiller started mentoring Greta and got her the most important contract of her career with Metro-Goldwyn-Mayer (MGM) in Hollywood. Initially, accounts narrate that, Louis B. Mayer, the chief of MGM at that time, was not convinced of her talent.

However, impressed by her performance in Torrent (1926), Mayer was convinced to the core and started looking after grooming her into a big industry star himself. Torrent was one of the first movies of Garbo that proved how talented she was. Apart from the American movie, The Temptress, which was a disaster for the talented silent movie star in the making, all other Garbo’s movies to follow were super hit and earned her millions of dollars. She later completed super hit romantic silent movies that were ever made, such as Flesh and the Devil (1927), Love (1927), A Women of Affairs (1928), and The Kiss in 1929.

Her romantic pair with her co-star, John Gilbert, in three of the above movies turned into a serious affair when they started living together after their super hit silent movie, Flesh and the Devil. People went crazy about their on-screen chemistry and could not help but term her as a romantic sensation. 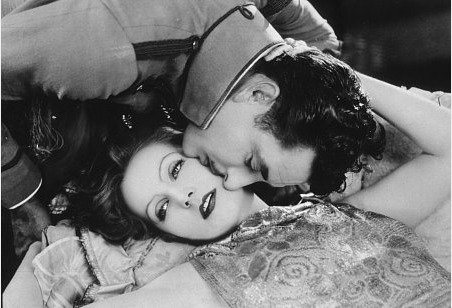 With her movie, A Woman of Affairs (1928), Garbo beat a long-time throned silent movie actress, Lillian Gish (link with Introduction to Lillian Gish: A Silent Screen Star). She ruled the world of silent movies for the decade and became the top-grossing silent movie actress of the year 1928-1929. Due to her extensively detailed expressions translating every emotion without uttering a word, MGM made the transition to sound quite later in those times. The studio feared that her Swedish-English accent might impact her performance and bring down her fame. However, the studio did transform to sound with the last movie starring Greta Garbo, named The Kiss (1929). With the popular tagline, “Garbo Talks!” MGM started promoting Garbo to the audiences in the United States and Europe. She opened the decade of 1930s with another one of her box office hits, Anna Christie (1930). If uncountable fans were drooling over the actress’ expression and immersion in the character, they only doubled in number when they heard her speak for the first time in a husky and alluring voice. Garbo was claimed to be loved and appreciated by both the genders – women loved how she portrayed women and men were crazy about her beauty.

In 1931, Garbo appeared in one of her most popular roles, a German spy, in the movie Mata Hari. Her performance was ecstatic and won millions of hearts, more than ever. Following the massive success of the role of a German spy, Garbo then accepted and carried out the role of a Russian ballerina in the movie, Grand Hotel, released in 1932. These back to back hit movies by Greta Garbo were two of the most famous movies of her career. The movie Grand Hotel also won the Academy Award for Best Picture that year. Due to the huge success of these two movies, MGM earned with both hands as people loved watching her in these movies. Garbo’s ecstatic and unmatched performance led her to become one of the biggest money-making heroines on the screen. However, in 1932, after the release of her film, As You Desire Me, her contract with MGM ended, which resulted in her returning to Sweden again. A year after her contract ended, Garbo was again offered to renew the contract and appear on the screen. Garbo returned to work with MGM but not without some conditions of her own. She demanded that she would be given the lead role in an upcoming movie, Queen Christina (1933) and asked for a raise. The studio readily accepted both her conditions. However, she also conditioned her return and renewal of the contract with being paired up with her lover and first on-screen partner, John Gilbert. As John Gilbert was already on a declining period of his career, the studio had its concerns on casting him in a lead role against the on-screen queen those days. Nevertheless, Gilbert and Garbo returned to the screen with a high-budgeted movie, Queen Christina, which was widely promoted with the slogans, such as, “Garbo returns”. Despite all the concerns that the studio had about casting Gilbert, the movie was a raging success on the box office, and people relieved it with immense praise.

During the next project Garbo selected for herself, Camille (1936), she lost one of her mentors and the best directors that Hollywood ever had, Thalberg. The same year, when her career was at soaring heights, she lost her lover, John Gilbert. However, with the closing of Camille, she was grieving for two major losses in her career. The film, nevertheless, went on to perform impressively on the box office. Greta Garbo’s excellent performance in Camille won her the New York Film Critics Award for Best Actress. Her role in Camille as the Alexandre Dumas Fils’s heroine also resulted in another Academy Award nomination. The years that followed were not very good in terms of earning and popularity for Garbo’s career. Her movie, Conquest (1937), was one of the most shocking disasters of the MGM studio. Therefore, the studio stopped casting Garbo in the same mainstream movies and ventured starring her in a comedy movie, Ninotchka (1939). The studio well projected the change of pace for Garbo’s movies, and it promoted the movie with the catchphrase, “Garbo laughs”. This venture proved to be a good decision and Garbo’s image was changed from a melancholic damsel to a comedic one. Ninotchka performed very well in the United States. It was, however, banned in the Soviet Union as the movie’s script revolved around Joseph Stalin and his rigid traits before the war. Maybe partly due to the war outbreak or because of the horrifyingly poor performance of one of her last movies, Two-Faced Woman (1941), Garbo’s popularity began to fade. It is sometimes stated that it might be the studio that made her work in a movie that proved to be the end of her career. On the other hand, Garbo told a Swedish autobiographer that she was altogether tired of working after her movie, Two-Faced Woman. She attempted the screen-test and initial rounds of a few movies after deciding her early retirement, but those projects never materialized. After ruling on the big screen without any competition for 20 years, Garbo silently caged herself in her apartment in New York City. Her seclusion and retirement never impacted her cult following, and it only increased after she decided to isolate herself from the screen.

In 1955, Garbo was awarded the Honorary Oscar, but sticking to her own decision, she never attended the ceremony.

Garbo was one of the finest Hollywood actresses that ruled the screen without and with sound. Her mesmerizing beauty and charm led her to produce hugely successful movies one after the other. She was always an enigma for her fans and remained comparatively private in her public appearances.

Garbo Greta died on 15 April 1990, aged 84, as a result of renal failure and pneumonia. However, it was later claimed that she also suffered from gastrointestinal and periodontal ailments, towards her end. She was cremated in Manhattan, New York City, and her ashes were interred at Skogskyrkogården Cemetery just south of her native Stockholm, in 1999.