The term “Grand Slam” refers to the four most important tennis events:

How to distinguish among the different “Grand Slam” victories:

It is interesting to note that some tennis players have failed to achieve all four titles (or five, if it’s a Golden Slam). However, they have won titles from any of the four tournaments.

And yes, there is someone who has achieved the Golden Slam – specifically the calendar Golden Slam – and it’s none other than German tennis star Steffi Graf. She is the first and the only tennis player, male or female, to achieve this rare feat.

Here is the list of the female tennis players who have won the most number of Grand Slam singles titles (as of February 2021): Born Margaret Smith in Albury, New South Wales, Australia, in 1942, Margaret Court is a natural left-hander. But she was persuaded to switch to the right-hand grip when she was just starting her tennis career.

As if Court’s singles titles weren’t enough, she also won 19 Grand Slam doubles titles and 21 Grand Slam mixed doubles titles. If these achievements didn’t make her the greatest tennis player of all time, we don’t know what is.

Court retired from her active tennis career in 1977. She now resides in Perth, Western Australia, and is currently a Christian minister, making her the Reverend Margaret Court. Below are her 24 Grand Slam singles titles: Serena Williams has powered her way up to where she is now – one of the greatest players in tennis history and one of the all-time greats of women’s tennis.

She and her older sister, Venus, have proven to be dominant forces in the sport. Together, the sisters have won all four Grand Slam women’s doubles simultaneously (2009 to 2010).

Williams is especially at home with hard court surfaces, as proven by her 13 Grand Slam singles. She also maintains the Open Era record for most titles won at the Australian Open with seven and the U.S. Open with six (a record that she shares with Chris Evert).

As of this writing, Williams is the only active player on this list. This means that she still has the chance to equal Margaret Court’s record of 24 Grand Slam singles titles, or even surpass it, breaking a new record in the process. Retired tennis star Steffi Graf has made the distinction of winning the first-ever and only calendar Golden Slam in tennis history. She won titles from all four tournaments, plus an Olympic gold medal, in a single calendar year (1988). No other tennis player – male and female – has achieved this rare feat before and since.

Graf also holds the record for the longest period for which any tennis player, male or female, has held the No. 1 ranking with a total of 377 weeks. Her versatility across all types of court surfaces enabled her to maintain dominance in each of the four tournaments equally during her active career.

Together with her compatriot Boris Becker, Graf was seen as instrumental in popularizing tennis in Germany. She is married to fellow retired tennis star Andre Agassi (a former No. 1 in men’s tennis), with whom she has two children. It’s a rare occasion when a pre-Open tennis champion is included on the list. Helen Wills (or Helen Wills Moody) won a total of 31 Grand Slam tournament titles, including 19 singles. Wills also became one of the first American athletes to achieve global celebrity.

Her 19 Grand Slam singles titles include: While Chris Evert was involved in a few rivalries, the most prominent rivalry she had was with Martina Navratilova. It became one of the most iconic rivalries in tennis history.

Evert appeared in 34 Grand Slam singles finals, the most of any other tennis player in history, male or female. During the height of her career and after her retirement in 1989, she also served as president of the Women’s Tennis Association from 1975 to 1976 and 1983 to 1991. Martina Navratilova has won 18 Grand Slam singles titles, tying the record with her famous rival Chris Evert. Apart from meeting each other thirteen times, she and Evert also teamed together in women’s doubles on a few occasions, including their winning stints at the 1975 French Open and 1976 Wimbledon.

Navratilova enjoyed a long career and a fantastic record. During the peak of her career, she was ranked No. 1 for a total of 332 weeks in singles, only second behind Steffi Graf. She was also No. 1 in year-end singles seven times (including a record five consecutive years). And last but not least, Navratilova is the undisputed queen of Wimbledon, winning a record nine singles titles. Like all other women tennis players on the list, Billie Jing King (nee Moffitt) is a career Grand Slam winner. She is the winner of 39 Grand Slam titles, including 12 singles titles. The retired American tennis star was more at home in grassy courts, as evidenced by her six Wimbledon singles titles (and an even better 10 Wimbledon doubles titles).

King is also an off-court champion, this time of gender equality and social justice. She founded the Women’s Tennis Association and the Women’s Sports Founder. Nicknamed “Little Mo,” Maureen Connolly’s first passion was horseback riding. But because her mother couldn’t afford to take her to riding lessons, she switched to tennis instead. Connolly started her tennis career at ten, and at 16, she won her first major title at the U.S. Open, becoming the youngest-ever winner of the said tournament. She went to win more Grand Slam titles in singles as well as doubles and mixed doubles.

Connolly injured her leg in a freak horseback riding accident, which effectively ended her promising tennis career at only 19. She died in 1969, aged 34, after a three-year bout with ovarian cancer. 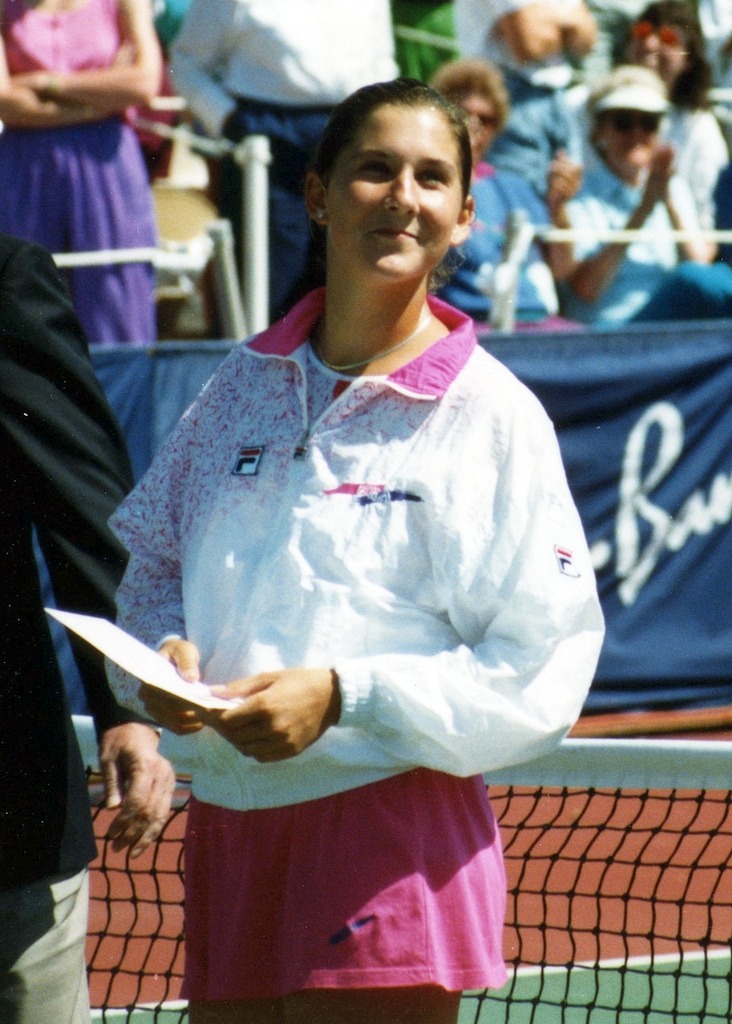 A part-Hungarian, part-Yugoslavian and part-American, Monica Seles won most of her nine Grand Slam singles titles as a Yugoslavian. In 1990, she became the youngest-ever French Open champion when she was only 16. She went on to win eight more Grand Slam titles and was the top-ranking player in women’s tennis before turning 20.

Seles would have certainly dominated women’s tennis had not a deranged Steffi Graf fan run onto the court during a match and stabbed her on the back. Although she recovered physically and came back to tennis, she would never regain her former best form. She won only one after, her fourth Australian Open title (this time as a U.S. citizen) in 1996. Still, her name remains firmly in place among the tennis legends.