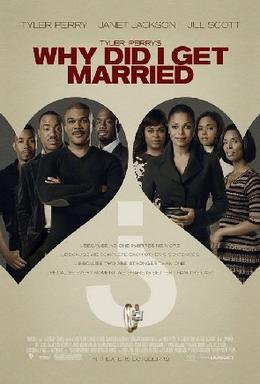 Why Did I Get Married? is a 2007 American comedy-drama film that is written, produced, directed, and starred by Tyler Perry. It was released by Lionsgate in the United States on October 12, 2007.It is a film adaptation inspired by Perry’s play of the same title. Aside from Tyler Perry, the film also stars Janet Jackson, Malik Yoba, Tasha Smith, Jill Scott, Sharon Leal, Richard T. Jones, Michael Jai White, Keesha Sharp, and Denise Boutte.

Story of the Film

The film Why Did I Get Married? is about the struggle of keeping a solid relationship in modern times. Its story revolves around eight married college friends plus one other non-friend who went to Colorado and stayed there for a week for their annual reunion. The mood changes when one couple’s disloyalty comes to light. Their secrets were discovered and each couple began to question their own marriage.

The couples in the film battle with issues about commitment, betrayal, and forgiveness over the course of the week. They examine their lives as individuals and as well as committed couples. Why Did I Get Married? explores the resultant emotional impact that unfaithfulness and love have upon the structure of marriage.

Why Did I Get Married? Cast

A lot of the church and message scenes were taken out of the film because Perry, according to an interview, want the film to be “on a whole ‘nother spiritual level—there’s a whole ‘nother connection to it.”. Perry also invited experienced and neophyte African-American actors such as Danny! and Tracee Ellis Ross to a reading of an early script in order to field reactions.

Atlantic Records released the soundtrack of Why Did I Get Married? on October 2, 2007 but what’s surprising is that neither Janet Jackson nor Jill Scott were featured on the soundtrack. The film’s soundtrack debuted at number 51 on Billboard 200. It was number 7on R&B and Hip-Hop Albums, and number 6 on Soundtracks. Around 58,000 copies of the album were sold in its first week. Here are the songs included in the soundtrack.

“Why Did I Get Married?”was able to earn $21.4 million on its opening weekend. It was shown in 3,105 theaters in the United States and Canada and it ranked number one at the box office. On the second weekend of the film, it slipped to number two in the box office charts, earning a gross of $12.1 million. Its 10-day total was over $38 million and it total, the film grossed $55,862,886 domestically.